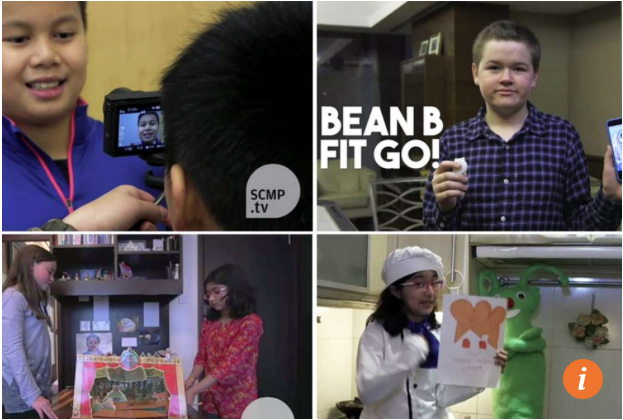 Creativity sparks amongst the young and inspires us all. But how as parents, can we balance supporting bright ideas without putting pressure on our kids to succeed? And, how do we manage inevitable failures and stresses as ideas grow into reality. Things to consider for certain, but for now,  the young Hong Kongers are off to a roaring start!

From making educational videos to building a wearable fitness tracker to developing ‘an Uber for food’, these bright sparks aren’t short of ideas.

Bhavnani and Johns, both aged 10, started Lil’ Explorers in August 2014 as a club for young students to pick up skills using an approach they say is more suited to the way young children learn.

Each week, the two young teachers and a friend develop ideas to teach the 12 children they have under their care for free for an hour and 15 minutes every Wednesday.

“What we do is have fun because when adults teach little kids, they were little kids ages ago, but we were only little kids a few years back, so we know what they enjoy,” Bhavnani said.

Bhavnani and Johns are among the Hong Kong youngsters who are proving age is no barrier to achievement in the city’s vibrant start-up scene.

And with business ideas ranging from tutoring programmes to wearable fitness trackers, these young entrepreneurs may well be building the businesses of the ­future.

Hong Kong has a strong culture of entrepreneurship, with the number of start-ups increasing 46 per cent in 2015 to reach 1,558.

Bhavnani said the abilities of young entrepreneurs should not be underestimated, and it’s easy to see why.

Lil’ Explorers is Bhavnani’s first venture and she is now developing Good Home Chefs, a service she describes as “Uber for food,” which will connect home cooks with customers who want to order their dishes.

Her latest idea was developed under insurer AIA’s Emerging Entrepreneur Challenge which was held over three months from November last year.

The young entrepreneur said she is willing to give up her playtime to work on the company as she irons out how to deliver food from cooks to customers.

“When I did Lil’ Explorers, I had a little jump-start because I knew what to do for Good Home Chefs and what I needed to address,” she said.

Tiny Tutors, a group of three classmates aged 10 and 11, join Bhavnani and Johns in fitting business planning between homework and tutoring.

Tiny Tutors also took part in the AIA programme, producing educational videos on a variety of topics designed to provide an alternative to classroom learning.

Their project was inspired by co-founder Ethan Chan’s visit to a school in Shaoguan, Guangdong province where he discovered underprivileged students had to walk for more than an hour to get to class and that the standard of education was lacking.

“When Ethan told us about this situation, we thought there must be computers in the library at Shaoguan, so we thought of building a website of tiny tutors and to put educational videos onto YouTube,” said Tiny Tutors co-founder Wesley Lai.

The trio are now building a website to host their videos and plan to create partnerships with tutor centres and the government to help distribute their content. Their website will feature ­subscriber-only videos alongside free clips.

Elias Adams, 13, has been developing a smart watch since July last year to monitor the steps he takes as well as his sleep after being inspired by a FitBit fitness tracker.

He plans to launch a Kickstarter crowdfunding campaign to finance the project and expects to have his product on users’ wrists by November.

The young designer says has has spent more than HK$1,000 on creating prototypes using a 3D printer and has contacted factories and prototyping companies to work out production costs.

Although the project started out as a direct copy of his FitBit fitness tracker, Adams said he realised he could produce his own design for both the watch and the accompanying app.

“It’s more fashionable and also really affordable,” Adams said. “[The app] knows who you are, so I think that will be a key selling point of the watch and how it works.”

John Huen, founder of coding school Koding Kingdom, said that while it is becoming trendy for young people to start building businesses at a young age in the United States, this is phenomenon has yet to reach Hong Kong.

He said starting a business could give young people valuable skills in dealing with people and networking.

Dr. Quratulain Zaidi (BSc. Hons, MSc, MSc, PhD) is a mother and a member of the British Psychological Society and British Association Counselling & Psychotherapy and abides by the Ethical Framework for Good Practice in Counselling and Psychology. She has lived in Hong Kong and Singapore for 12 years.  She specialises in assisting families with issues including parenting, teen issues, Cybersafety,  marriage guidance, post natal depression, stress and anxiety disorders, depression, bullying, eating disorders, OCD and self-harm. She is an expert in educational assessments and learning challenges in children, for example ADHD, ADD, Dyslexia and ASD.